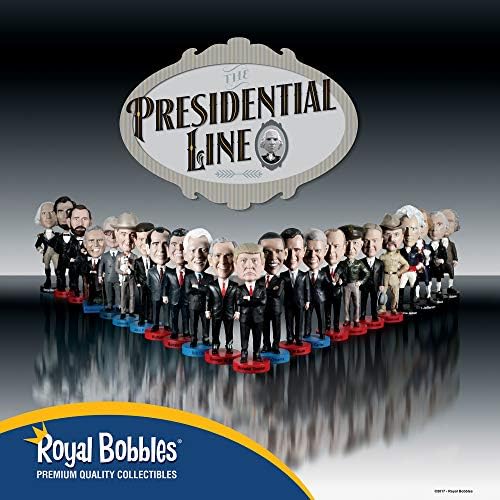 This Donald Trump bobblehead is part of Royal Bobbles’ collection of famous icons. This collection features icons in American history whom we all love and cherish. Donald John Trump was born on June 14, 1946, in Queens, New York. He was the fourth of 5 children of Frederick C. and Mary Trump. Frederick was a builder and real estate developer who specialized in constructing and operating middle-income apartments in the boroughs of New York City. You may have recognized Trump from his days producing and hosting the reality TV show The Apprentice. In June 2015, Trump declared his candidacy for President of the United States as a hopeful for the Republican nomination. Since that time, his campaign events have had record turnouts, and his appearances have broken records. The first GOP debate, moderated by Fox News, was watched by a record 24 million viewers, according to Nielsen data, making it the highest-rated primary debate in television history. Donald J. Trump won the presidential election on November 8th, 2016 and became the President-elect. On January 20th, 2017, Donald J. Trump took the oath of office and became the 45th President of the United States. This model is crafted with extreme attention to detail and is of the highest possible quality. View other bobbleheads in our collection to learn more about other famous icons. All of our bobbleheads are about 8” tall and are made from high-quality, heavyweight polyresin. Each bobblehead is hand painted, making each one unique. Each Royal Bobbles product comes with its own unique serial number on the bottom of the base to indicate authenticity.

Added to wishlistRemoved from wishlist 0
Add to compare
$19.95
9%