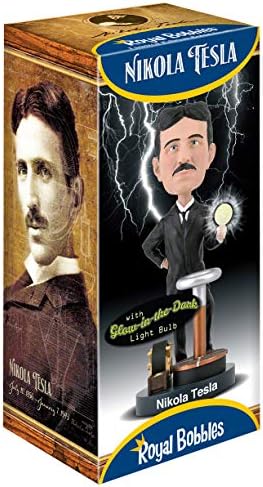 This Nikola Tesla bobblehead is part of Royal Bobbles’ collection of scientists. This collection features scientists who made great contributions and discoveries. Nikola Tesla was a brilliant scientist whose discoveries and inventions in the field of alternating current electricity advanced the United States and the rest of the world into the modern industrial era. Many of the new technologies in the world today are based on Tesla’s ideas. His discoveries and inventions include the Tesla coil, fluorescent light, wireless transmission of electrical energy, radio, remote control, alternating current, induction motor, rotating magnetic field, cosmic radio waves, and the use of the ionosphere for scientific purposes. He has been called “the genius who lit the world.” Tesla’s technical and scientific research was a necessary step toward freedom of information. While he is attributed with a number of inventions, Tesla perhaps had thousands of other ideas that we don’t even know about. With hundreds of patents, Nikola Tesla was a legendary inventor and scientist. View other bobbleheads in our collection to learn more about other scientists. All Royal Bobbles bobbleheads are about 8” tall and are made from highest-quality, heavyweight polyresin. Each bobblehead is hand painted, making each one unique. Each Royal Bobbles product comes with its own unique serial number on the bottom of the base to indicate authenticity.

NIKOLA TESLA BOBBLEHEAD: Our intricate bobblehead portrays a lifelike image of Nikola Tesla. He invented alternating current, x-rays, radios, remote controls, lasers, and the electric motor among other inventions that impact your daily routine. This mini figurine of Tesla recognizes his ingenuity as one of the world’s legendary inventors.
FAMOUS SCIENTISTS COLLECTIBLES: Royal Bobbles features an entire line of famous icons, including famous scientists, artists, singers, political figures and other historic figures! Great for collectors of every genre, these bobbleheads make great gifts for everyone!
UNIQUE, COLLECTIBLE BOBBLEHEADS: Each Royal Bobbles premium quality bobblehead comes in a colorful, printed collector’s box with a custom cut Styrofoam inner protection. All Royal Bobbles bobbleheads are made from high-quality, heavyweight polyresin, stand at over 8” tall and are individually hand-painted. Each figure features a hologram with a unique serial number on the bottom of the base to indicate authenticity.
LIFELIKE FIGURINES- EXQUISITE DETAIL: Because each Royal Bobbles bobblehead is carefully researched, hand painted, and crafted with care, each design is extremely detailed. Royal Bobbles is leading the industry with their realistic and lifelike likenesses, making them right at home in any environment: whether a desk, display case or even classroom!
PREMIUM BOBBLEHEAD STATUETTES: Founded in 2009, Royal Bobbles is a premium designer and manufacturer specializing in high-quality, exquisite collectible figurines, allowing for a high level of detail and durability in every product. The quality and detail of Royal Bobbles products and packaging is unmatched in the industry.

Added to wishlistRemoved from wishlist 0
Add to compare
$24.95