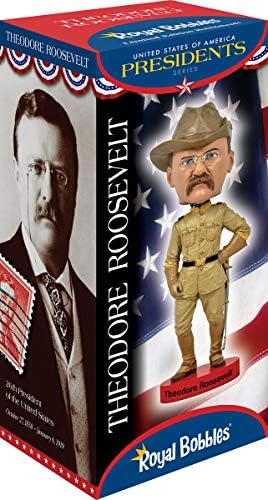 During his presidency, Roosevelt initiated the construction of the Panama Canal, increased regulation against big business, improved national forest and sanctuary programs, and passed the Food and Drug Act. In his 1904 re-election campaign, Roosevelt won by the largest popular vote majority ever received by any presidential candidate. In November 1902, Roosevelt attended a bear hunt in Mississippi, where a bear was tracked, clubbed, and tied up. He was appalled at the treatment of the bear, and refused to allow anyone to claim it. A cartoon of this story became wildly popular, and “Teddy’s bear” became a long lasting nationwide legend. Theodore Roosevelt became the first American President to be awarded the Nobel Peace Prize.

TEDDY ROOSEVELT BOBBLEHEAD: Theodore Roosevelt Jr. was an American statesman, conservationist and writer who served as the 26th president of the United States from 1901 to 1909. He previously served as the 25th vice president of the United States from March to September 1901 and as the 33rd governor of New York from 1899 to 1900.
HISTORIC COLLECTIBLES: Royal Bobbles features several different product lines of famous icons, including entertainers, artists, singers, and historical/political figures. Perfect for collectors of every genre, these bobbleheads make great gifts for everyone! Each figure features a hologram with a unique serial number on the bottom of the base to indicate authenticity.
UNIQUE, COLLECTIBLE BOBBLEHEADS: Each of Royal Bobbles’ premium-quality bobbleheads come in colorful, printed collector’s boxes with custom-cut Styrofoam inner protection. All Royal Bobbles bobbleheads are made from high-quality, heavyweight polyresin, stand at over 8” tall, and are individually hand-painted.
LIFELIKE FIGURINES, EXQUISITE DETAIL: Because Royal Bobbles bobbleheads are carefully researched, hand painted, and crafted with care, each design is extremely detailed. Royal Bobbles is leading the industry with their realistic and lifelike likenesses, making them right at home in any environment whether it’s on a desk, display case or even in the classroom!
PREMIUM BOBBLEHEAD STATUETTES: Founded in 2009, Royal Bobbles is a premium designer and manufacturer specializing in high-quality, exquisite collectible figurines, allowing for a high level of detail and durability in every product. The quality and detail of Royal Bobbles products and packaging is unmatched in the industry.