The Shores of Tripoli Board Game 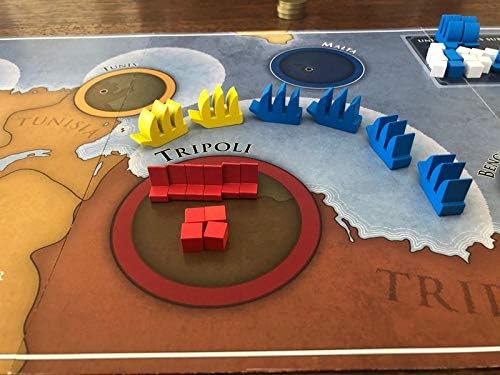 From the end of the American Revolution, commercial vessels of the young United States republic were easy prey for the pirates of the Barbary coast. In 1801, newly inaugurated President Thomas Jefferson was eager to put an end to this threat and sent a “squadron of observation” to the Mediterranean. As the squadron arrived in Gibraltar, they learned that the bashaw of Tripoli had already declared WAR!

The Shores of Tripoli plays out this exciting episode of Early American military history. As the United States, one player will pressure Tripolitania to allow the free movement of American merchant vessels – or face the consequences. As the bashaw of Tripoli, the other player will continue the lucrative piracy of the fearsome corsairs while countering the American threat on land and sea.

The Shores of Tripoli is a historical board game on the First Barbary War
Play as the intrepid US Navy and Marine Corps or as the daring pirates of Tripoli
1-2 Players, 45-60 Minutes, Ages 12+

SEQUENCE for Kids — The ‘No Reading Required’ Strategy Game by Jax

Double Ditto – The Hilarious, Award-Winning Family Party Board Game for Adults, Teens & Kids (8 and up)

Added to wishlistRemoved from wishlist 0
Add to compare
$21.99

The Shores of Tripoli Board Game